Bob and Heather Garrett with their 1928 Austin Seven Chummy​

This car was bought in early 2018 in a sorry mechanical state but having the benefit of a virtually new replacement alloy body, sound chassis, new fuel tank and good upholstery. 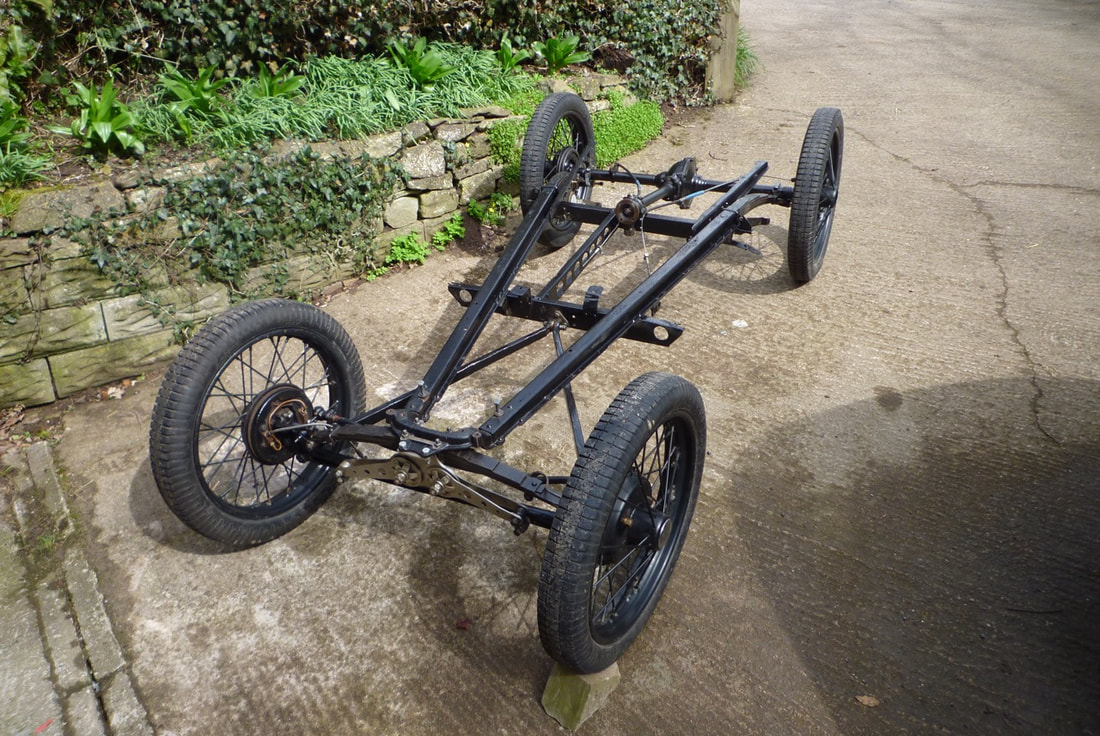 After a ‘body off’ complete mechanical re-build and new wiring etc, the car was back on the road within two months.  The engine, gearbox, axles and brakes were rescued from a previous early 1930s much travelled Austin Seven - whose bodywork was found to be unsafe, having more filler than metal.  Interestingly, that car is now being re-bodied by a very skilful friend, to enjoy a new lease of life as an A7 van.
Austin Seven purists will not approve of my numerous departures from originality.  However, my aim was to make the car safe, enjoyable to drive, and hopefully reliable, whilst minimising as far as possible all visible outward changes.
Engine –
The Austin Seven 750cc side valve engine has been gently modified to improve its reliability and deliver a modest increase in power from the original 10.5 BHP.  This has been achieved by using a re-profiled camshaft, a high compression head, a later A7 carburettor and a modern distributor.  The original crankshaft has also been replaced by a modern much stronger one made by ’Phoenix Engineering’ and a full-flow modern oil filter has been incorporated. 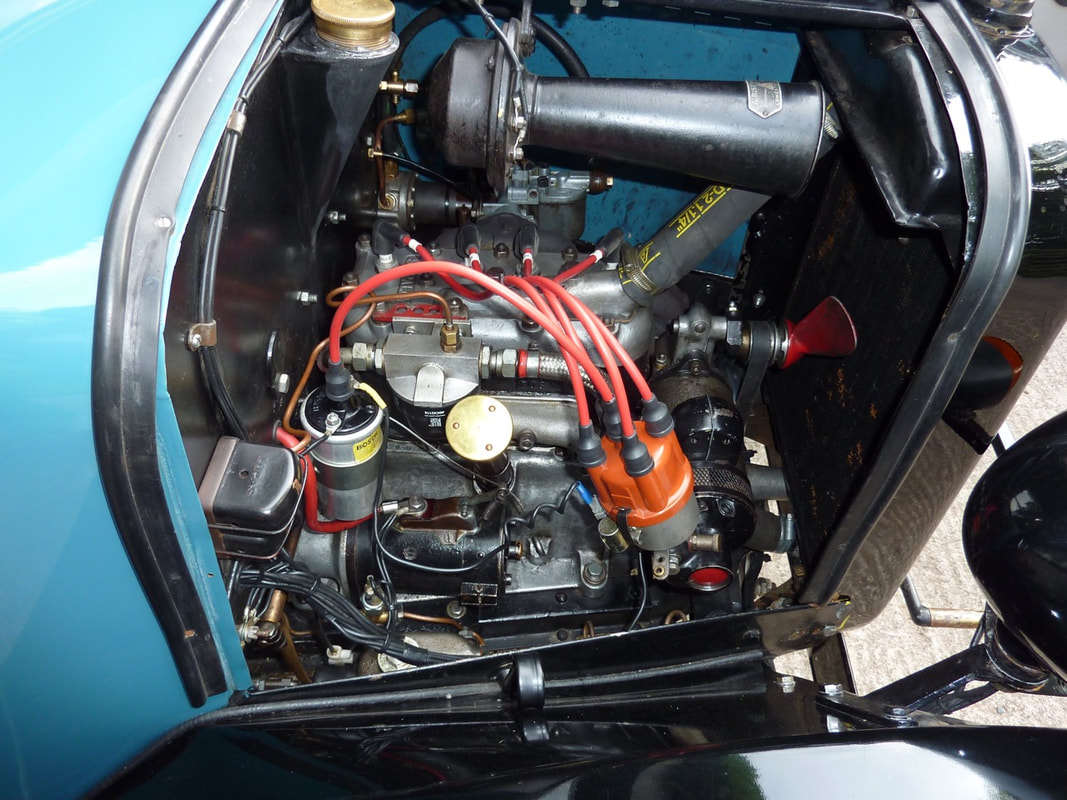 The "power house"
Gearing –
This car would originally have been fitted with a three speed ‘crash’ gearbox but now enjoys a ‘box from a later (1937) A7 with synchromesh on 2nd, 3rd and top.   In addition, a ‘close-ratio’ configuration has been created by changing the constant mesh gears to give higher 1st, 2nd and 3rd ratios and this makes it lovely to drive.
The back axle ratio has also been changed from the original 4.9:1, to 5.25:1 to give improved performance, particularly acceleration.
Chassis –
Austin Seven brakes were never a strong feature - so modified Morris Minor hydraulic brakes have been fitted together with strengthened radius arms - providing much improved braking.  This was a popular modification for Austin Sevens in the fifties and sixties.
A specially made, new, full Hardy-Spicer prop’ shaft has also been fitted together with a ‘twin-disc’ front suspension damper.
Electrical -
The car has been completely re-wired, to include a modern fuse panel under the driver’s seat and flashing indicators.  The original six-volt electrical system has been retained, because all lights have been converted to LED and therefore use a fraction of the current.  This gives the 6-Volt dynamo a much easier ride. 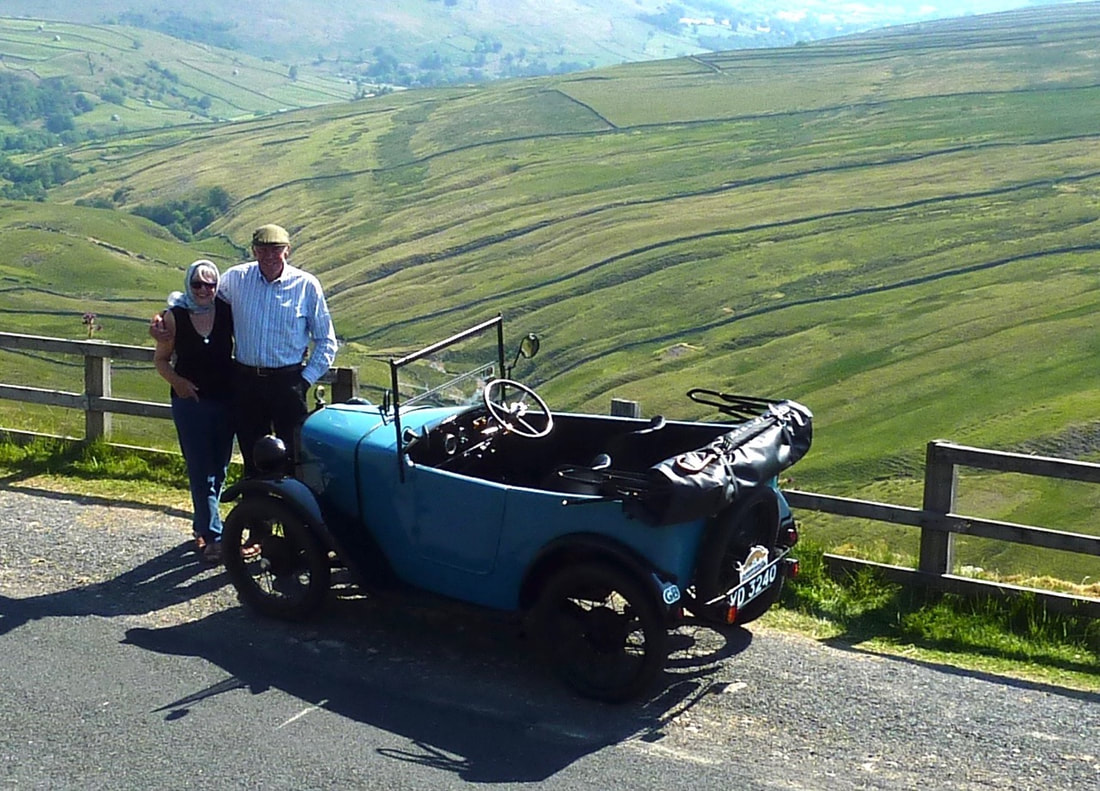 This car really is great fun to drive and with a top speed of around 60mph we can usually keep-up with modern traffic.
Bob Garrett ……….. Very happy owner!
August 2018